The next morning I was eager to tackle the RCO radio shop. Al and I planned to change into old jeans and T-shirts.

Al opened the cypher lock on the door into the tech offices without looking. He turned left to the radio section. The telephone and crypto offices were off to the right.

When we walked into the radio area RCO Roberson and the Marine Security Guard “Gunny Sargent” in-charge stood tall with eyes locked on us.

Roberson, more red-faced than usual, waved a telegraphic message and said, “What’s this all about?”

Al grabbed the message and perused it. I looked over his shoulder at the confidential classified document. A pain hit me deep in the pit of my stomach.

The Marine Gunnery Sargent in charge of the MSG named Mike (who sadly would transfer to Am Embassy Tehran late next year and become a hostage for 444 days) said, “One of my guys found that classified telegram clipped to the back of an unclassified travel message.”

Mike pointed at the inbox tray on my newly appointed desk and glanced at me.

The unclassified telegram was my arrival message with a paragraph addressed: “For CEO Al C. Please review SEPTEL (separate telegram) for recent SY threat assessment for our discussion upon arrival.”

“I’m responsible,” I said to Roberson and the MSG. “I must have misplaced the classified document in the shuffle yesterday before we locked up. I’m sorry.”

“We can’t let this happen,” Roberson replied firmly. “Come on, we need to go talk to the Post Security Officer.”

Al didn’t seem surprised. He had said earlier, “I’m used to everything turning to shit around here.”

“Let’s go,” Roberson said, as I stood there motionless.

Roberson, the MSG named Mike, and myself stood in front of the Post Security Officer named Smoltz who sat behind a desk. All posts had a designated security officer who reported to the nearest Regional Security Officer. Smoltz worked closely with the MSG. I had seen him at the weekly Con Gen meeting in the “cone of silence” with Bob.

Smoltz rose and walked over to us. He said to me, “You just arrived at post a few days ago.”

He looked me over before continuing, “Tell me what happened.”

“Al and I were working on a report for RCO Roberson.”

I nodded to the RCO.

“It required that we remove several classified docs from the Moser cabinets to read and summarize traffic for each post. Before beginning, I clipped the classified document together with an unclass doc. I would have to refer back to each during my research. Looking back on it, I see that was a mistake.”

I shrugged. What else was there to say?

“A word to the wise,” the post security man named Smoltz said with serious intent. “Treat unclassified documents the same as you would classified docs. Lock ‘em up. Get smart.”

Roberson, who had been uncharacteristically quiet, nodded his head in agreement. The MSG chief, Mike, answered his two-way radio and told Smoltz that he’d have to excuse himself.

After Mike departed I said, “I’ll make a practice of locking up both the classified and unclassified traffic. It won’t happen again.”

“From what you’ve told me it was an honest mistake. But, this will go into your permanent record. One security violation, a minor infraction, but I must stress the importance of your taking this seriously. I have seen career diplomats drummed out of the Foreign Service due to a series of security infractions.”

The sudden quiet was disarming.

Roberson might have manifested the makings of a smile in a brief expression.

“Okay, that’s all I have,” Smoltz said as he pushed a document on the desk toward me and added, “Sign this document indicating that I’ve notified you of the security violation.”

I signed my John Hancock and we left.

As we walked down the hall, Roberson said, “Nice report you guys did yesterday. Keep up the good work.”

We got into the elevator. I stopped at the third floor. He kept going down to the lobby.

An early lunch at the Pakistani Officer’s Club, huh Bob?

I reflected on my rocky start at Am Consul Karachi. I had embarrassed myself at the Consulate General’s luncheon. Without thinking I had broken my crackers over the chili with bare hands. But this security violation was the pièce de résistance. Leaving out classified documents—the most severe of Foreign Service sins—had cast blight on my record for all time. Somehow though, I sensed that my truthful explanation might have earned an ounce of respect with Bob, Smoltz, and the MSG Gunny, Mike.

Reelin’ in the Years 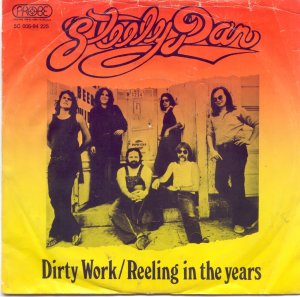 Al must have seen I was bummed out by the security violation. That evening he invited me over.

Sue popped corn while Al and I sipped beers. In the background, “Are you Reelin’ in the Years?” played from Al’s stereo tape player connected to an amplifier.

Surprisingly, Sue was really into Steely Dan. The group led by singer/songwriter Donald Fagen was one of my favorites.

I raised my beer. “It damned well better not.”

He smiled as Sue handed us bowls of slightly burnt popcorn.

The hugely popular T.V. series that began a decade ago, Get Smart, appeared on the Pakistani TV channel that showed old reruns. Al turned the volume down on Steely Dan’s, “Do it Again” in favor of the Get Smart theme song, which should be my song from now on.

Bumbling secret agent Maxwell Smart jumped out of his red convertible and negotiated a series of top secret vault doors until he approached the innocuous telephone booth.

Al interjected, “Agent 86, this is the Chief calling. You left top secret microfilm in your shoe. That’s a security violation.”

“Sorry about that chief,” I replied as Maxwell Smart entered the telephone booth and dialed the secret number.

Maxwell Smart dropped into an abyss. Agent 86 had descended into the depths of “CONTROL.”